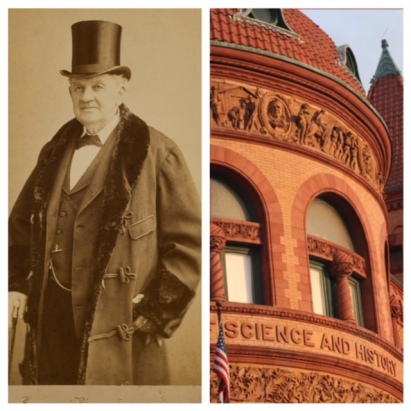 P.T.  Barnum – as relevant today as he was over 100 years ago.  As Executive Director of the Barnum Museum and someone who has dedicated many years of my career to the study of P.T. Barnum – I interestingly find I have something in common with Donald  Trump – his admiration of P.T. Barnum and that ‘Yes!’ – we all need a bit more P.T. Barnum in this world.

Please understand that this is by no means an endorsement or criticism of political ideas or philosophies, or politicians for that matter, but I find myself in a unique situation.  During this election year P.T. Barnum is repeatedly being thrown into the political arena.  As steward of P.T. Barnum’s vast and complex legacy and reputation, I am compelled to respond to candidate Trump’s January 12th response to a question from NBC’s Chuck Todd on Meet The Press:

“Some people are calling you the music man of this race, or Kim Kardashian, Biff from the film “Back to the Future”, George Costanza, . . . or P.T. Barnum. Do you consider any of those [comparisons] a compliment?” Todd asked.

“P.T. Barnum.” was Mr. Trump’s quick response.  “We need a little bit of P.T. Barnum because we have to build up the image of our country,” he said.

P.T. Barnum is remembered for a variety of things today – some fact and a lot of fiction.  However; I believe it is in the context of Barnum’s mastery of promotion where Mr. Trump makes his connection.  Indeed, P.T. Barnum understood the tone, complexion and hopes of 19th century Americans, and he worked tirelessly to celebrate the good in all humanity.  A champion of civil rights, temperance and moral order, Barnum believed it was an obligation to advocate for social justices and be a voice for change.  Serving as a Connecticut legislator (and later Mayor of Bridgeport, CT) Barnum addressed the Connecticut General Assembly “I have no axes to grind, no logs to roll, no favors to ask.  All I desire is to do what is right, and prevent what is wrong.”

Barnum was highly intelligent and organized with indefatigable energy for invention and action.

Although best known for his “Barnum & Bailey Greatest Show On Earth,” Barnum was actually 61 years old when that endeavor was launched.  Barnum’s notoriety and public acclaim was already embedded in American society based on the remarkable success of his American Museum in New York City (1842-1868) and his long career in politics and show business.

It was in fact the ground-breaking innovations of Barnum’s American Museum that transformed public perception of entertainment, ushering in the age of family entertainment, enlightenment and instructive amusement based on his unprecedented marketing campaigns and promotional genius.

Barnum uncovered a world of the grandiose and the unusual and, in doing so, engaged the curious and invited controversy.  P.T. Barnum was the answer to the democratic impulse to challenge the establishment. His pioneering spirit of promotion and his knack for business transformed popular conceptions of the era, in turn molding and defining so much of the world we live in today.

In Barnum’s own words:
“The one end aimed at was to make men and women think and talk and wonder, and, as a practical result, go to the Museum.  This was my constant study and occupation.”

These are words we aspire to everyday at the Barnum Museum.

2 thoughts on “The Barnum-Trump Connection”